Which cognitive traps do we fall into? 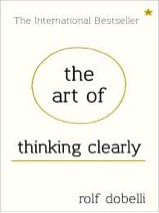 Since the 1960s, scientists have been examining our thinking, decisions and actions empirically. One of the discoveries is irrationality: our thinking is not rational, but prone to error, and this affects everyone. In the last decade, Rolf Dobelli, PhD in economic philosophy, has been devouring articles and books by cognitive scientists on systematic biases in thinking, and visiting their labs. Over his career, he has compiled a list from cognitive psychology of these systematic thinking errors. His hope is that this book, The Art of Thinking Clearly, might help us to learn to recognise and avoid the frequent irrational pitfalls we fall into.

Reading this book, I’ve been reflecting on the flaws and blind spots in my own thinking on education. After the challenges that flooded in on my controversial blogpost on Sir Ken’s Robinson’s ideas, some humility is definitely in order: perhaps it’s time to take a dose of my own medicine, and attack the assumptions that underpin the educational ideas and beliefs I hold. As Laura McInerney has challenged us to ask, what if everything I thought about education was wrong?

Realising the flaws in our thinking may be useful as we think about  education. I’ve chunked my ideas on this into a series of three blogposts: first on education blogging, next on teaching practice, and finally on the education system. If, as headteacher John Tomsett suggested at the Labour Teachmeet, ‘we are creating a civilisation of the mind in cyberspace’, it may be worth looking at some of the traps our minds fall into. So I’ve listed the cognitive biases that I reckon we often fall into in edublogs:

I’ll try and apply each bias, which Dobelli applies mainly to finance, to education, and come up with some examples.

‘We establish beliefs about the world underpinned by lots of assumptions. We find daily proof to support the case, filtering out disconfirming evidence to the contrary. In books and blogs, readers seeking disconfirming evidence do so in vain. Online divergent opinions vanish from the radar. We stick to communities of like-minded people, reinforcing our convictions.’

Twitter can become an echo chamber, where like-minded groups follow each other, retweeting and echoing each others’ opinions: the tongue-in-cheek metablog that has collated over 1000 blogposts (mainly by teachers) in the last 6 months, The Echo Chamber, self-consciously plays up to this.

Avoidance: ‘Try writing down your beliefs, and set out to find disconfirming evidence. Axeing beliefs that feel like old friends is hard work, but imperative’.

2. *Introspection Illusion: Be your own heretic

‘Nothing is more convincing than your own beliefs.’

In this blog, I am beginning to build up a manifesto of ideas on what I think is most problematic in education (graded observations, national levels, inconsistent inspections, flashy gimmicks, snake oil, ineffective CPD) and what some of the solutions might be: a rigorous curriculum, mastery assessment, explicit instruction and practical CPD, based on cognitive science. Other education blogs, far ahead of me, have built up coherent manifestos of their own: for instance, Old Andrew and headteacher Tom Sherrington.

Avoidance: ‘Be all the more critical with yourself. Regard your internal observations with the same scepticism as claims from others. Become your own toughest critic.’

3. *Single Cause fallacy: the wrong question

‘As Leo Tolstoy said, “when an apple falls, what makes it fall? Gravity? The withered stem? The sun drying it out? The apple growing heavier? The wind shaking the tree? The tree flexed by the boy beneath? No one thing is the cause.” This is one of the most common of all mental errors: asking the wrong question, “what’s the one root cause?”’

In this blogpost, I asked ‘what is great teaching?’ and tried to simplify it down into the ‘one deep controlling insight or organising principle that underpins sustained success, the greatest possible impact over the longest period of time.’ What I came up with was this: ‘great teaching is effective instruction plus continuous improvement’. Of course, this begs the question, ‘what is effective instruction?’ which I also tried to answer, but it revealed circular logic and is very, very far from capturing everything great teachers do.

4. *Cherry Picking: drawing the bulls’ eye round the arrow

‘We select the examples that work for us, and fail to mention those that don’t.’

In this blog, I admit to having cherry-picked a few schools that are applying the ideas of mastery assessment, such as ARK schools King Soloman and Burlington Danes. But they by no means shows a national trend. Nor have I looked into schools where mastery assessment has not worked.

In publishing a series of ebooks for new Teach First participants, we aimed for 50% of the 1000 trainees to get the books. Now that fewer than 40% have, it is tempting to shift the goalposts and say that is what we intended all along.

Avoidance: ‘Ask about the leftover cherries, failed projects and missed goals. You learn more from these than successes. Seldom are such questions asked. Double-check targets. Over time, original goals fade, replaced, quietly, with always attainable goals.’

The first two imperatives for avoiding cognitive bias seem especially useful for challenging my own ideas in education with a healthy dose of scepticism: ‘kill your darlings’ and ‘be your own heretic.’ So here are a couple of ideas that I hold particularly dear on the curriculum:

And here is a great challenge to that from a commenter on this blog:

“I think the reality is that you overstate the case that skills agenda has taken over the asylum. Robinson and Claxton are influential yes but they are not central players – and if 200 schools are running Opening Minds that leaves thousands that aren’t… is it possibly the case that you too are generalising from the particular?” …

“If Dan Willingham and Joe and others agree that critical thinking skills form a desirable educational aim – and indeed that we should teach knowledge as a prerequisite for higher order critical thinking skills – then what is the problem with these skills being assessed? My point is, skills are present yes but I think they have often been ill-conceived, taught poorly, and assessed haphazardly. This doesn’t mean it’s a lost cause – we just need to do it better.”

If skills have been taught and assessed badly, the idea that we need to improve the way we teach and assess them seems sensible. This is a strong challenge, and one I will keep thinking about.

Am I prepared to kill my ideas on a knowledge-led curriculum? Not quite, but I am prepared to examine and test the assumptions underpinning them. Does sequencing and consolidating knowledge really help disadvantaged pupils succeed? Does mastery assessment help teachers increase these pupils’ academic achievement? Is there a way of optimising (or at least improving) the interleaving of the curriculum sequence? Perhaps we can start by seeking out both confirming and disconfirming evidence to refute these initial hypotheses.

I’m very grateful to those who have taken the time to challenge my ideas on the blogosphere. It is helping me to recognise my own biases, and reminding me how important humility is, in such a complex field as prone to cognitive bias as education.

In the next post on cognitive biases in thinking about teaching practice, I’ll look into *effort justification*, *the paradox of choice* and *decision fatigue*. In the final post in the series on cognitive biases in thinking about education systems, I’ll look into *authority bias*, *forecast illusion* and the *novelty effect*. It’s a very exciting avenue of research.

23 Responses to Which cognitive traps do we fall into?