Odysseus faced the peril of the Sirens and their irresistible song. He told his men to fill their ears with wax so they would not be tempted by the music, and to tie him to the mast so he could hear it, but be restrained from submitting to the temptation to steer closer to the fatal rocks…

A casual stroll through a students’ union bar on any weeknight will tell you peer pressure is one of the most powerful influencers out there. Peer pressure is at its most visible and visceral when it comes to drinking alcohol. Just try ordering a glass of water when out with the rugby club.

In schools, peer pressure is just as visceral. Whether it is a force for good or ill, depends. Where it pressurises kids into bullying or bystanding, disrupting lessons or disrespecting teachers, it can be monstrously damaging. Where it creates a virtuous circle of friendly competition, encouragement, hard work and useful revision, it’s a big, friendly giant. Where it tips over into unhealthy competition, sleepless nights and agonising stress over grades, it’s just as dangerous a beast.

How do we harness the daunting power of peer pressure, especially when it comes to motivation, willpower and self-control?

‘Problems arise when people must make decisions that test their capacity for self-control. Self-control issues are most likely when choices and consequences are separated in time. Costs are borne immediately, but benefits are delayed. On the other hand, for some things we get the pleasure now and suffer the consequences later.’

This sounds to me exactly like the decision that pupils have: ‘do I make the costly effort to work hard now for some hazy, eventual, potential future? Or do I have fun, muck about and disrupt the lesson, earning street cred now from my peers, which pays off right away?’ The options of effort exertion and lesson disruption have opposite reward profiles: the first has immediate costs and delayed benefits; the second has instant benefits and delayed costs.

But this isn’t a simple, rational incentives problem. Thaler and Sunstein again:

‘Self-control issues can be illuminated by thinking about our minds as containing two systems, a far-sighted Planner and a myopic Doer. The Planner is trying to promote your long-term welfare but cope with your tempted Doer. Self-control strategies are our Planners taking steps to control the actions of our Doers often by trying to change the incentives our Doers face. Doers are often difficult to reign in (think of controlling Homer Simpson) and they foil the best efforts of the Planners. For example, alarm clocks lead to fierce battles between the Planner and the Doer. Stickk.com is a way planners can constrain their doers by committing to a specific action or habit. It uses peer pressure such as emails to family & friends, group blog. Alarm clocks are external commitment devices people use to solve their self-control problems. ‘

But remember, internal control systems are vital. You still have to overcome the snooze button!

There’s a fantastic TED talk on exactly this problem by Daniel Goldstein, who personifies it:

So, Odysseus used one of the first commitment devices to strengthen his future self over his present self.

For pupils, the battle is even more unequal: the present self prefers fun to effort, and their thirty peers do too. Against these forces, weakly voicing the need for effort, are only the feeble future self and the lone teacher. The temptation to give in to distraction is very high. It’s a classic self-control issue, and as we know, demanding self-control for extended periods of time (like the school day) is depleting.

Given that peer pressure is a reality, how do we turn peer pressure from negative to positive influence? Goldstein gives us a clue: external commitment devices like alarm clocks (or, for pupils, sanctions like detentions) don’t always work, so intrinsic commitment is vital.

Making positive peer pressure more visible just might work. Goldstein does this with finance: he makes the future self more powerful by building visual products that let people ‘see’ the future consequences of their present actions. I ham-fistedly tried to do this with this graphic in my first year of teaching: 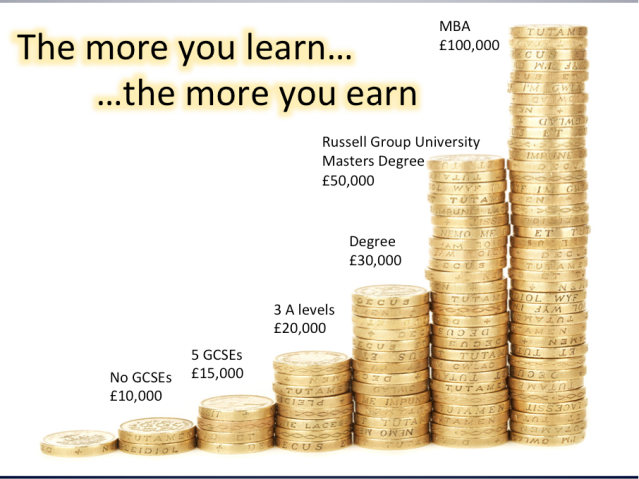 I started using visible tracking, and it tapped into the undertapped resource of healthily competitive peer pressure, as I share in this story.

Why might this work? Behavioural economists have shown in scientific research that the urge for conformity is strong. ’We like to conform, we don’t want to face disapproval of the group and we so we do as others do.’ For instance, on tax returns, messages that say ‘more than 90% of people have already complied’ increased compliance. So visual, public display of pupils’ effort across subjects would harness the power of peer pressure for effort exertion.

‘But everyone else is doing it!’

‘Humans are hardwired to connect to others. Our social brains catch willpower failures contagiously through unintentional mimicry, emotion contagion and seeing others give in to temptation. We eat more with others than alone, and spend more when shopping with friends. Rule-breaking is contagious. Researchers have shown this with passers-by of signs: when rule-breaking was planted, people took their cues and ignored the signs. When we see others ignoring rules and following their impulses, we are more likely to give in to any of our impulses. We catch willpower weakness from others.

‘This is called *social proof*: it has an enormous sway over our behaviour. For instance, researchers tested social proof with energy usage: they went door-to-door with different messages: ‘99% of people in your community turn off unnecessary lights to save energy’ was by far the most effective for reducing energy usage. Social proof can strengthen self-control when we believe that doing the right thing (or the harder thing) is the norm. If we want people to have more willpower, we need to make them believe that self-control is the norm.

‘Research has also shown *goal contagion*: it is surprisingly easy to catch a person’s goal in a way that changes our own behaviour. In one study, students caught the goal to work hard just from reading a story about another student who worked hard over the Easter holidays. These students worked harder towards tests. Seeing another person pursue one of your competing goals can tip the balance in your own mind. To a remarkable degree, our brains incorporate the goals, beliefs and actions of others into our decisions. The flip-side is also true: our actions influence others, each choice serving as inspiration or temptation for others.

‘Self-control is influenced by social proof, making both willpower and temptation contagious.’

‘We care more about looking good than being good. Our minds are 90% chimp, 10% bee: we have primate minds with a more recent hivish overlay. People are simultaneously selfish and groupish. We evolved to live in groups, we are designed by natural selection as conditional hive creatures. Groupishness was a key innovation that took us beyond selfishness and into civilization.’

Ultimately, external commitment needs to be internalised in pupil mindsets, as I wrote last time. What does this mean? The key insight is the difference between automatic system 1 and the reasoned system 2. A brilliant metaphor for this is Jonathan Haidt’s: the powerful elephant and the reasoning rider:

‘The mind is divided in many ways, but the division that really matters is between reasoned processes and automatic processes. These two parts are like a rider on the back of an elephant. The rider’s inability to control the elephant by force explains many puzzles about our mental life, particularly why we have such trouble with weakness of will. Learning how to train the elephant is the secret of self-improvement.’

How do we train pupils’ elephants? How do we tap into pupils’ hivish and chimpish nature? How do we strengthen pupils’ self-control and willpower? How do we empower their future selves over their present selves? How do we give pupils’ restrained, far-sighted planners control over their impulsive, myopic doers? How can we ensure they choose effort over disruption every lesson, no matter who teaches it? How do we strengthen their weak system 2? That we can ask these questions, which I think get to the core of motivation, is thanks to the insights of behavioural economists and social psychologists.

4 Responses to Motivation and peer pressure