Who says knowledge is pointless in English?

Part of the reason why knowledge gets neglected in English curricula and assessment is it gets marginalised in observations.

I have argued before on this blog that skills are being detached from knowledge in English. From what I’ve seen, many English departments take this approach: even the great English departments I know still use the skills-based assessment system of Assessing Pupil Progress and national levels at Key Stage 3: abstract descriptors of skills that apply across content to any text.

Now, this blogpost of mine was criticised on two main fronts. Some denied that such a skills-centred approach existed at all, and that no teacher they knew advocated this approach; others denied that knowledge and content were valuable in the first place.

“A lot of work to create the idea of a skills-centred ideology that just does not exist. Nowhere have I encountered the consensus you imply dominates our education system. I don’t know a single teacher ever who would argue against the acquisition of knowledge.”

David Didau kindly reblogged this post, and the following comment can be seen on his blog, The Learning Spy:

“I write as an ex-consultant, head of department, advanced skills teacher, current examiner and educational writer, with experience in four different educational systems.

“This is why we teach skills: because if we teach content, that content will be entirely different in 10 years or 20 years. Skills are portable. Content is not.

“And as for me, I’m of the opinion that I teach whatever content fits the students, because the skills should always be the same. Whether I teach “Oliver Twist” or I teach “Holes”, I am teaching them to read more precisely, to infer meaning, to think about how the writer manipulates us, to develop theories, to support theories with evidence. The content is largely irrelevant as long as they can apply their skills to something different.

“I wholeheartedly disagree that possessing knowledge improves your ability to think. I’m afraid your criticisms would give way to a ‘filling of a pail’ approach rather than a ‘lighting of a fire’ approach.

“Learning facts: all it prepares them for is pub quizzes. If you had taught knowledge rather than skills, you’d see why I’m so dead set against it. The problem for me is that when you have taught in an environment where knowledge and content is equal to, or superior to, skills, then you understand why trying to plough through content seems so very pointless.”

What you’ll notice here is the idea that while skills are transferable, knowledge is not; ‘filling’ students with ‘irrelevant’ content and ‘pub quiz’ facts is ‘pointless’. This is not an isolated view. Daisy Christodolou has written an entire book filled with hundreds of concrete examples of exactly this kind of thinking. It is certainly not isolated thinking, but it is almost certainly mistaken. As cognitive scientist Daniel Willingham says,

“Data from the last thirty years lead to a conclusion that is not scientifically challengeable: thinking well requires knowing facts. The very processes that teachers value most – critical thinking processes such as reasoning and problem solving – are intimately intertwined with factual knowledge that is stored in long-term memory.”

It turns out, skills aren’t very transferable without knowledge. I think the way these mistaken ideas permeate English departments is partly through inspections and observations.

This term, I was observed at part of the annual appraisal process. I was teaching a lesson on the Greek myth Theseus and the Minotaur to a bottom set year 7 class with 26 students, 20 of whom have a special educational need. Here is some of the written feedback I was given:

“Lesson seemed mainly to be about consolidation of knowledge.”

“Students, when questioned, displayed good knowledge of myths and their heroes.”

“All students enjoyed their English lessons.”

“Students effusive and enthusiastic about their English lessons.”

“Difficult to see any evidence of progress in lesson.”

“Progress was marked by students answering series of comprehension questions.”

“Difficult to assess whether progress had been made.”

“Students had good recall of content of myths but little evidence in books of analysis or other thinking.”

“Focus of lesson seemed to be consolidation of knowledge.”

Here is some of the verbal feedback I was given:

“You need to focus on skills, not on content.”

“There were missed opportunities for them to analyse.”

“If OFSTED come in, they need to see progress in skills in the lesson.”

“You need to be beyond knowledge.”

“Without the skills, the knowledge isn’t worth much.”

“Put a skill in the objective: analysing, not just understanding – that’s right at the bottom of the taxonomy.”

“Otherwise it’s impossible to give them a level- without that, we’re stuck.”

“It looks like all you spend your time doing is knowledge quizzes, which I know you’re not – if that’s it, then there’s a problem…”

“You’ve got to get them interrogating the text.”

“Your plan should have what the students are doing: OFTSED need to see that, not too teacher-led.”

Since I started teaching, the feedback I have been given in observations takes the same approach. “English is a skills-based subject”, I am told. I am advised to create skills-based rather than knowledge-based objectives; pressed to use empathic diary entries rather than teaching contextual facts explicitly; exhorted to use ‘higher-order’ questioning and higher-order skills instead of ‘lower-order’ recall questions and comprehensions.

If I’ve understood it, central to this feedback is the idea that analytical and critical thinking skills are more important for progress than knowledge, comprehension and recall. The idea is that in English, the content of the text and context doesn’t matter nearly as much as the skills students can transfer to any text. There are quite a few reasons given for this: firstly, we want students to be able to analyse a broad range of texts; secondly, Ofsted require progression in skills within observation lessons; thirdly, education theory in the form of Bloom’s taxonomy elevates analysis to the top and relegates knowledge to the bottom of the ladder. 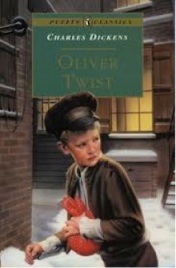 First, it does matter that our pupils remember the content of the text and context, so that they can compare new texts with their knowledge of texts they’ve read. For instance, if I’ve taught Oliver Twist, when they come to read Great Expectations or any other Victorian novel, it helps if they can remember the characters, plot, themes and context I’ve taught them; it’s no good if they forget it all.

Third, Bloom wrote his taxonomy in 1956. Interpreting knowledge as “lower” than skills is mistaken. Instead, in the 65 years since, we now know that shallow knowledge is a vital prerequisite foundation, moving up through surface to deep and enduring knowledge, and must be integrated with skills. In other words, Bloom’s is less like a league table with knowledge at the bottom and skills at the top, and more like a double helix where knowledge and skills go all the way up. Cognitive scientist Daniel Willingham amongst others has shown that knowledge is as important as skills for learning. 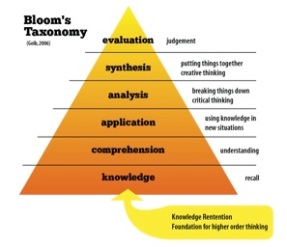 The latest distortion of Bloom’s taxonomy is knowledge as the mere tip of an iceberg. Just like those who interpret Bloom’s as a rush beyond mere, basic, ‘lower-order’ recall to ‘higher-order’ skills, those who designed and share this take a similar approach: to teach knowledge is merely to ‘skim the surface’; ‘deep sea’ skills are far more important. 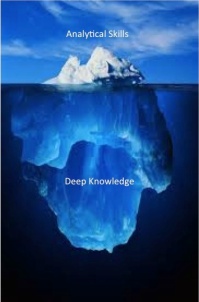 But knowledge is far from just the tip of the iceberg. In the topsy-turvy world of English education, we’ve got the iceberg the wrong way up! Decades of cutting-edge research from cognitive science show that reading and critical thinking skills don’t transfer easily, but depend on a broad range of background and domain-specific knowledge (De Groot 1978, Kirschner Clark Swiller 2004, Willingham 2010, Hattie 2013). For instance, it’s hard to have a debate if you know nothing about it; if we had a debate about baseball players or Bornean headhunting, we’d struggle, just as kids without much cultural capital at home struggle to discuss ideas in literature. Richer kids get this cultural knowledge at home and in private schools; poorer kids don’t get this at home, so why not ensure they get it in school?

So with this unit and lesson, the rationale was for my Year 7 class to remember the characters and plots of Greek myths, partly so that they can understand everyday references to a labyrinth, an Odyssey, Trojan horse, Achilles’ heel, chimera, Sisyphean task, Herculean labour, tantalising temptation, Midas touch or Pandora’s box; so that they can read A Midsummer Night’s Dream and know who Theseus and Hippolyta are; so that they can read Frankenstein and understand the sub-title ‘The Modern Prometheus’; so they get the hold on the Romantic, Victorian and modern imagination in poems like Prometheus by Byron, Ulysses and The Kraken by Tennyson, and Penelope, Demeter, Medusa, Mrs Midas and Mrs Icarus by Duffy. In their own right, the myths are exciting stories that both tell of the worldview of an ancient civilisation, and have endured and fascinated us for millennia. To teach their rich content is to give pupils access to their global cultural heritage.

The influence of Greek myth on Western culture

Mary and Percy Shelley: Prometheus Unbound and The Modern Prometheus

I do think analysis and critical thinking are the endgame; I teach my top set Year 8, 9 and 11s to analyse almost every day. But I disagree that downplaying knowledge is the best route to achieving this ultimate end. My standard set Year 7 are progressing fast in their knowledge, understanding and memory of characters and stories from mythology, and their literacy skills of writing accurately spelt, complete sentences – no trivial challenge. It’s a sound foundation, but not, of course, an end point.

To this end, my ideal Key Stage 3 curriculum and assessment system would be founded on combining broad knowledge, deep memory and extensive writing practice with analytical, creative and critical thinking skills. Why elevate skills over knowledge, when both are vital?

It strikes me that many, many English departments are beholden to this idea: that it matters little what content we teach; the important thing is to teach students skills they can transfer to any text.

It is my contention that this idea is shaky. But it is better to exemplify than to criticise. So over the next month on this blog, I’ll be exploring the alternative.

How would an English department teach if it based its curriculum and assessment not so much on transferable skills, and more on cultural capital? What if we replaced the outdated Bloom’s taxonomy with Willingham’s cutting-edge cognitive science, and ignored the OFTSED whisperers who say we must chase skills to get graded outstanding in our next inspection? What would an approach to English based on powerful knowledge, enduring memory and deliberate practice look like? And if we accept that there are some fundamental differences in skills-based and knowledge-based lessons and units, what are these differences? How do we design a mastery assessment system? How do you plan a knowledge-rich unit?

Hope springs eternal; many comments on this blog give me reason for hope, not least this one:

“You are making a skills evangelist rethink the what and the how”.

The time is right for us in English to rethink the what and the how.

27 Responses to Who says knowledge is pointless in English?